There’s nothing better than a warm, snuggly bed to help you relax. You’ve got your pillows, you’ve got your sheets, and that big old blanket to keep you warm no matter how cold it is outside. Winter is coming. But some say if you want to let go of all your stress, you should try a heavier blanket-like, 13 and a half kilograms heavier. 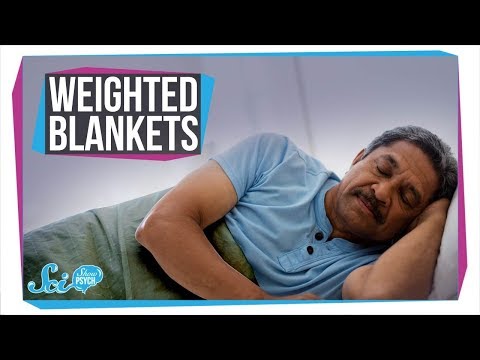 That’s because a lot of people swear by weighted blankets as a way to reduce anxiety, self-soothe, or sleep better. And the research to date does kind of support their use — but it’s not clear if these blankets do something specific or act as a placebo.

As the name implies, a ‘weighted blanket’ refers to a blanket that’s been specifically made heavier, usually with beads or chains sewn evenly through the fabric. According to safety studies, adding a dozen kilograms or so to your covers might sound smothering, but it doesn’t pose a significant health risk to adults. That said, it’s worth noting that this sort of extra weight isn’t suitable for everyone, especially unsupervised children. 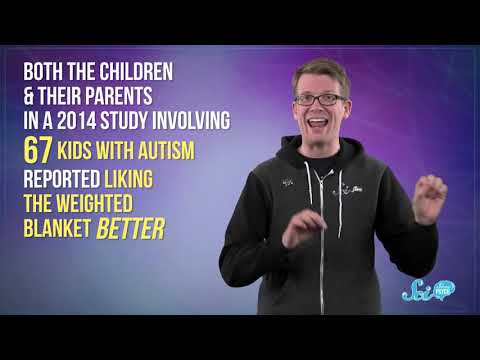 And there’s no real consensus on what weight to use, either. Many say around 10% of your body weight is the sweet spot. But how heavy you go is up to you.

Some people like their blankets a little heavier, some a little lighter. Different people are different. These weighted blankets are often suggested in mental health communities, particularly for people with anxiety. They’re also commonly used by people with autism, to soothe people with dementia, or by people who have trouble sleeping. And with so many uses across diverse conditions, they kind of sound too good to be true. But research suggests there may be something to them.

Several studies show, subjectively at least, that sleeping with a weighted blanket helps people feel less anxious. For example, in a 2008 study involving 32 adults, 63% reported reduced anxiety on a standardized questionnaire after sleeping with a 13. 6-kilogram blanket and 78% of them said they felt more relaxed with it. Other anxiety studies have had similar results. Even in studies that don’t look at anxiety specifically, a pretty large portion of participants seems to like the experience for what it is. For example, 31 participants with chronic insomnia in a 2016 study reported feeling safer and more comfortable when they slept with a weighted blanket. They also believed they slept better — and they were right.
Sleep quality data revealed that they tossed and turned a whole lot less under the heavy blanket. They also stayed asleep for longer intervals. Similarly, both the children and their parents in a 2014 study involving 67 kids with autism reported liking the weighted blanket better. The only thing is in that study; it didn’t help them sleep longer. When it comes to improving sleep, the research is a pretty mixed bag. Same with their use by people with autism — sometimes they seem to help with anxiety or behavioral symptoms, sometimes they don’t. There is some evidence that a weighted blanket can help you relax during a stressful situation. A 2016 study monitored 60 patients’ heart rates while getting their wisdom teeth removed, with 30 of them receiving a weighted blanket halfway through. The data suggested that while everyone found the procedure stressful, those that didn’t receive a heavy blanket spent more time in “fight or flight” mode — basically, they were freaking out, while the others were able to calm down somewhat. But not all scientists think the heart rate measures used are reliable indicators of nervous system activity. And no one knows how weighted blankets could trigger a more relaxed state. Some scientists think they provide deep pressure stimulation — a type of pressure that is thought to trigger your nervous system’s chill mode. But even if that’s true, there’s a bit of a gap regarding how that works. It could be a cognitive thing — that pressure makes you feel like you’re being held or hugged, and that feeling is just super reassuring — something we’ve evolved to find relaxing. Or, something about the weight itself could trigger changes to the cells that nudge the nervous system towards relaxation. Or any benefits could be a placebo effect: people feel relaxed or sleep better when wrapped in these heavy blankets simply because they believe that’s what should happen. To figure out how weighted blankets work when they do, we’d need a study with placebo control. But you can’t make a not-heavy blanket that people think is heavy. That means a true placebo-controlled trial, where people aren’t sure if they’re getting a weighted blanket or not, it’s not possible. And that makes it a lot harder to tease out whether the positive effects people report are because of their expectations that it’ll work or the actual blanket. In the end, some would say it doesn’t matter why they work — just that they do. For many, weighted blankets are a source of relief for some pretty unpleasant symptoms. And that’s great. I like blanket hugs. But they don’t work for others, and scientists can’t say why. In the end, it all comes down to individual preferences. Like I said earlier, different people are different. So ultimately, it’s really up to you if you want to give this snuggly coping technique a try, also to your bank account. I don’t think they are cheap.